From Streets Alive Yarra: ‘Parks Victoria have developed a “functional design” of a ramp to replace the Gipps Street steps, and are now requesting tenders for engineering design services. Here are some images of the proposal – all image credits are Parks Victoria and Hansen Partnership.’

Have your say: Have your say on our plan to improve cyclist and pedestrian safety and open a new viewing platform for visitors to this stretch of the Yarra River.

Complete the survey: The survey runs over 4 weeks until Friday 4 August. To have your say on the plan to improve cyclist and pedestrian safety and open a new viewing platform for visitors to this stretch of the Yarra River, complete the survey here

The existing 42 concrete steps stop people with prams, those using wheelchairs and all but the fittest of cyclists, who can carry their bikes up the steps, from using this section of the Main Yarra Trail. Following the four-week public consultation period, Parks Victoria will finalise its plan in response to the community feedback and then continue with the important infrastructure upgrade project. If you would like more information about this project please email gippsstramp@parks.vic.gov.au or phone 13 1963

A new ramp will connect to the Collins Bridge, then follow the existing Main Yarra Trail down the riverbank towards the Collingwood Children’s Farm, Yarra Bend Park, over the Chandler Bridge and on to Merri Creek Trail.

Richmond state Labor MP Richard Wynne will today unveil plans for the $4.1 million project, which will offer a new entry point to the renowned trail.

“The Main Yarra Trail is one of Victoria’s best spots for cycling, walking and enjoying the great outdoors. Access has long been a problem from Abbotsford, but we’re fixing that,” Mr Wynne said.

“For too long, cyclists have had to lug their bikes down 42 steps, and for others the steps have been simply impossible to negotiate. We want people who use the trail and locals to put forward their views on what is the best design for the project.”

A set of stairs connecting Abbotsford’s streetline with the Main Yarra Trail will finally be replaced by a shared pathway.

The upgrade will create a new wider entrance to the Chandler Bridge with a connection to the ramp, improving traffic flow, boosting safety and separating inbound bridge traffic from northbound ramp traffic.

Four weeks of consultation is now open, giving the public a chance to provide feedback 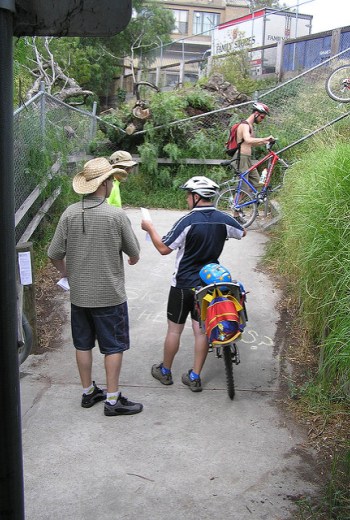 May 2016: Gipps Street Steps planned to be upgraded to ramp

Yesterday, their transport strategies received a vote of confidence when the State Government announced a $72 million boost in funding for bike paths. The money is to be spent over 10 years, and will be used to upgrade on-road bike lanes and off-road bike trails to make them safer for commuters and families and establish more direct routes around Melbourne. The funding boost was announced on the Capital City Trail in Abbotsford, where a much-loathed set of steps is to be replaced by a ramp.